Some of you have tuned into my website to find out how I can travel "faster than a speeding bullet" sitting in an ordinary chair.  The answer follows, but I hope you will also go on to see my books described below.   The science fiction books are entertaining stories based on real physics and technology.  You will also find a historical novel that is based on my first-hand observations of dangerous work on high-voltage power lines in the 1930's.. Linemen who have read the book say they have experienced narrow escapes similar to those in the story.  The book of short, humorous, true anecdotes has been described as hilarious by readers.

The answer to your question is: a speeding bullet travels at about 1,000 ft/sec.  That's 682 miles/hour.  The earth is travelling at about 66,000 miles per hour in order to make it around the sun in one year.  Therefore, when I sit in any chair, I am travelling faster than a speeding bullet.  (Of course, that also happens when I'm in any other position.)  Even if the earth weren't plummeting around the sun at that speed, I would still be travelling "faster that a speeding bullet" since the earth's diameter is about 8000 miles, giving it a circumference of about 25,000 miles.  It makes one revolution in 24 hours.  So we are travelling around the earth's center at more than 1000 miles per hour.  Of course, you probably knew all of this.

Four of Donald R. Green's books are summarized below, and then fully described along with red navigation buttons for accesing a free "Look Inside" feature on the Amazon page dedicated to each book.

Although they are gripping adventure stories, they are largely based on real science.  For example, The Future: Century 23, story contains an easy method for building working home-made 12- to 50-ft. diameter solar furnace mirrors to focus  intense solar heat on a small area and produce power at high temperatures .

Laughs and Gaffes is a hilarious book of humor.

Living on Lightning is a historical novel about the life and narrow escapes of a power lineman during the Great Depression in the 1930's.  Electrical linemen during the Great Depression worked at great peril.  The lineman main character in Living on Lightning had many adventures and narrow escapes, even after he became a sub-station operator and electrician.  Although safety has improved, linemen today face some of the same dangers.  The setting for LIVING ON LIGHTNING, spans Philomath, Oregon; Spokane, Washington; Kellog, Idaho; Portland, Oregon; and Springfield, Oregon.

Don Green's first three books have been rated four and five stars out of five maximum by readers.  No comments have yet been received for his later books.  (See more complete descriptions below.)

Don Green is a well known author located in Woodinville, Washington. He graduated with degrees in physics from the University of Oregon and the University of Idaho,  has four patents, and has been honored with multiple awards for his accomplishments in engineering and physics.  He also completed classes in creative writing, and extensively researched his subjects to provide readers with the best possible information and entertainment value. In addition, he presents all of his books to test audiences in writers groups and workshop prior to publication for critiques to ensure the realism, suspense, entertainment value, and humor.

For your convinience, clicking navigation buttons 1, 2, 3 or FOUR below will instantly and easily take you to the Amazon.com page dedicated to each book.  There you can view the latest reader comments and ratings (where they exist), see a more complete description, use a free "Look Inside" feature allowing you to read early pages, see the latest price, and/or purchase a copy.  Closing the Amazon page will return you to this page. 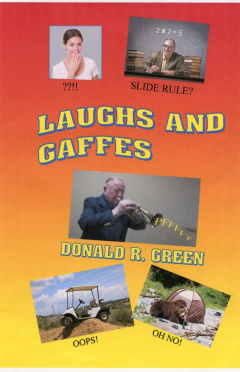 LAUGHS AND GAFFES  is an entertaining new book of short, hilarious stories (anecdotes) about events that happened to the author, his wife, and their families.  A number of readers have said every story either made them laugh until tears ran down their face, chuckle, or say “Oh no.”  A list of the stories is shown below.

Jack Jumped, Billy and Mr. Jones, Doughnuts, Bargains?, Getting Rich, Bananas, Trailer Communications, Moving Experiences, Split, Little Boy Next Door, The Deviled Egg Gaffe, Popping Lessons, Slippery, Slimy Thumb, Blank, Slide Rule, Business Travel is Such a Privilege, The Bear, That Dog, Scent of Man, See His Little Ears, Use Your Diaphragm!, Pfffft, The Trek, The Truck, The Siren, Watch Out For Rattlesnakes, The Green Hornet and Kato,  Intervention, Gullible’s Travels, The Warranty, Open Kimono Dash, The Little French Restaurant, Rhythm of the Sea, Late, Stranger in the House, A Thump In The Night.

OTHER BOOKS BY DON GREEN ARE DESCRIBED BELOW

An exciting science fiction story about a heroic, perilous effort by Dr. Jim Bennett, and his team of scientists and engineers, to save the earth from a micro black hole that has formed in a large collider on the Hanford Atomic Reservation in Richland, WA, (similar to the Large Hadron Collider near Geneva, Switzerland).

Dr. Bennet leads a crash effort to build a giant rocket ship and harvest a special kind of asteroid to save the earth.  Some readers say the last half of the story reminds them of the movie, "Gravity."

to see reader comments including 3 and 4 star ratings out of a possible 5 for this book.

Click button 1 below for an Amazon page offering a full description and a free "Look Inside" feature allowing reading of early pages in the book.  This book is too new to have any reader comments on Amazon.  You could be the first   Closing the Amazon page will bring you back to this page.

A gripping science fiction adventure story set in an uncertain 23rd century that is suffering from a lack of earlier government action, and too little alternative energy development during the 21st century.

The author, who is a retired physicist, describes a new type of automotive energy storage device, and an easy-to-fabricate solar furnace in the story.  He has performed computations and some experiments on these.

Three 23rd century heroes risk their lives to develop two devices that will save the world's population from a repeat of mid- to late-21st century catastrophes of starvation and hardship.

Click button 2 below for an Amazon page offering a full description and a free "Look Inside" feature allowing reading of early pages in the book.

The Amazon page also allows viewing reader comments by Simon Johnson,  English Professor Emeritus, Oregon State University, who rated this book 5 out of 5 stars.    Closing the Amazon page will bring you back to this page.

This historical novel is based on the life of Oregon and Washington lineman, Emmett Green, who worked in constant peril  on dangerous live power lines at up to 120,000 volts to make a living for his family during the great depression.   One in three linemen were killed on the job in the early days of line work.

Unsung heros, Emmett as well as other linemen, were routinely called upon for perilous duty to rapidly fix a problem, such as a live 60,000 volt downed power line, which was a danger to the public.  He had many potentially fatal close calls before the one that changed his life for the better.

Several readers have said this historical adventure story gave them a much better knowledge of what power linemen go through to keep our lights on.  The author wrote this story based on his observations of linemen in action, extensive research, and stories about Emmett's life and work adventures told first-hand to the author.

Two practicing linemen, who read the story, said it reminded them of similar narrow escapes they've had on the job.

Click button 3 below for an Amazon page offering a full description, a free "Look Inside" feature allowing reading early pages in the book, and to view many reader comments rating this book 5 out of 5 possible stars.  Closing the Amazon page will bring you back to this page. 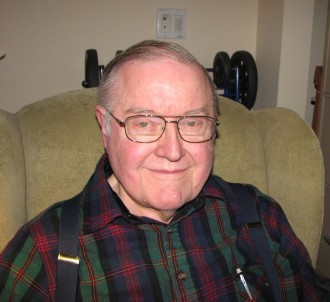 Surprise!  I'll bet you thought I was the handsome dude in the heading.    I'm looking forward to hearing from you, my readers, via Email to:  author.don.green@gmail.com.